The Rev. Debra Q. Bennett is rector of Church of Our Saviour. 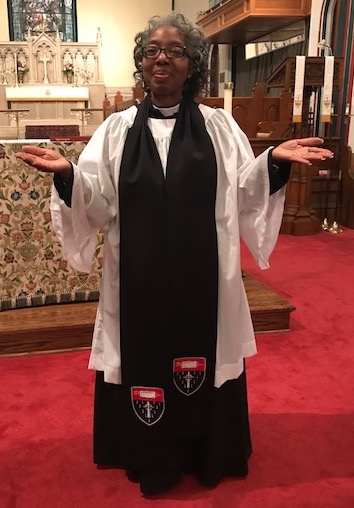 Mother Debra came to us in 2012 as priest-in-charge, and in 2014, the vestry chose her to be our rector (a priest with tenure).

Before coming to Church of Our Saviour, Mother Deb was priest-in-charge of St. Paul Episcopal Church in Roosevelt, New York, on Long Island. She is a graduate of  Wagner College and Bexley Hall Seminary in Columbus, where she earned a Master of Divinity in 2009. Prior to attending seminary, she had a nearly twenty-five year career in publishing.

Mother Debra is a two-time deputy from the Diocese of Ohio to the Episcopal Church’s General Convention and has served on Diocesan Council, the diocese’s Commission on Ministry, the Commission on Racial Understanding, as vice-chair and chair of the Summit Mission Area Council, and on a variety of other diocesan committees.

In Akron, she convenes the West Hill Ministerial Association, is a member of the Akron Faith-Community Leader Group, and serves as chaplain to the Akron PeaceMakers Youth Group

To schedule an appointment with Mother Debra, please call the church office at 330-535-9174.

In 2014, Mother Debra gave an interview to Church Life, the magazine of the Diocese of Ohio:

When did you feel called to be a priest?

I was actually aware of the call to be a priest after a number of years of discernment that actually began with the question had I ever thought of the ordained ministry and then subsequent questions such as, “have you ever thought of being a priest, you’d be good at that?” or “you’re in the process aren’t you?” or “you’re a seminarian aren’t you?” I began to think about the questions and my own sense of call and realized that at from a young age I was always drawn to the sacred. I loved being in sacred spaces and for me the perfect gift for my classmates when I was in grammar school was a plaque with a picture of Jesus and either the Lord’s Prayer, the Apostles Creed or the 23rd Psalm on it. As I looked over my life I realized God was calling me. I finally embraced the call when our Rector had been away from the parish on Medical Leave and as the one who was the convener and trainer of our Lay Eucharistic Ministers, in a way I became the assistant to our assistant to the Rector. The Sunday after Easter I walked into my apartment and said to myself, I can’t wait until I can do this all the time. That’s when I knew I was truly called to be a priest.

Once you left seminary, how did you make your way to this diocese?

Before coming to the Diocese of Ohio, I was a native New Yorker and a resident of Roosevelt, New York in Nassau County. As such, I was canonically resident in the Diocese of Long Island. Having been a seminarian at Bexley Hall Seminary in Columbus, the wiles of Ohio were not totally unfamiliar to me. After graduating from seminary in May 2009, I was assigned to serve as the Deacon –in-charge at St. Paul’s church in Roosevelt. I was ordained to the transitional diaconate in June 2009 and began serving St. Paul’s in August of the same year. In January of 2010 after my ordination to the sacred order of priests, I served St. Paul’s as Priest-in-charge for the next year and a half.

Early in January of 2011, I learned that the funding for a full-time priest at St. Paul’s was no longer an option for them.  I along with the congregation needed to discern where God was calling us next and what options were available to us. I had discerned that God was calling me out of St. Paul’s. With that knowledge, I placed my name to be considered in the call process in four parishes – two in the Diocese of Long Island, one in the Diocese of Newark and one in the Diocese of Ohio. As I moved through the process, a number of things occurred. The interim priest at one of the church’s died suddenly that resulted in a delay in their process, another search committee after meeting with a consultant decided to revamp their process – another delay. Another church slowed down their process considerably. But the call process with Church of Our Saviour was unhindered, all the doors were open, and everything lined up. As I continued to discern through all of the interviews and looked at all the signs, it was clear that God had called me to serve with the good people of Church of Our Saviour in Akron. Additionally, I was excited at the prospect of the opportunity for radical outreach and mission plus the opportunity to extend the radical nature of the gospel in this part of God’s vineyard.

What’s been the biggest difference between being priest-in-charge and rector?

The biggest difference between being priest-in-charge and rector is the stability being rector brings not just for me but for the parish. Being a permanent spiritual presence, allows for consistency in pastoral matters and sacramental aspects. We can truly settle in and discern mission and ministry opportunities for proclaiming and living out the gospel for years ahead.  We are engaged in a visioning process that involves not just members of the congregation, but our neighbors and community leaders as well that will inform how we serve as partners with our community to effect impactful and transformational ministry in the surrounding community we serve. We are participating in the collaborative camp and retreat campaign that will not only help in this new and exciting venture in the diocese but will also enable us to help secure our church plant for future mission and ministry to which we are committed. Additionally, being rector assists in providing consistent ongoing Christian formation opportunities for the members of the parish and the community.

As the first black woman and first black person to be rector in your parish, what does being rector mean to you?

First I must address the vision of the search committee, vestry and congregation of Church of Our Saviour for continuing the tradition of calling a priest whom they discerned is best suited to their mission, ministry and commitment to serve the community in which the church is located. This is a congregation that is courageous and seeks to live out the gospel to the best of its ability. Being the first African-American to serve as the Rector of the Church of Our Saviour is significant. The fact that I was the first African-American woman and rector called to serve at Church of Our Saviour didn’t occur to me until we were preparing for our Celebration of New Ministry. For me, it brought to my mind that I have been the first in many aspects of my professional life. Being the first Black rector, provided opportunities to engage the African-American clergy in the area and civic organizations in conversations around community needs. It opened the door for us to be involved in dialogue around Medicaid expansion and affordable healthcare, broader issues of healthcare and community safety.

Rector for me is a title that comes with much responsibility not just the importance of being a responsible, compassionate, pastoral, spiritually grounded spiritual leader, but also ability to speak truth when necessary with sensitivity and diplomacy. It is being the voice at the table that speaks from an experience that may be extremely different from everyone else but brings a rounding out of the dialogue. Being elected as the Rector at Church of Our Saviour after serving with them for two and a half years, is an affirmation of their confidence in this relationship. It is quite different when a priest is called to a parish as rector after a few interviews and a site visit. In this scenario, each entity spends a great amount of time getting accustomed to one another. There is much that is unknown on both sides. In my case, I have the great privilege of deeply knowing the congregation and they have the same in knowing me. I have the great privilege of being able to engage a large percentage of the community from the African-American experience as well as other members of the community because of my worldview and experience. Finally, being rector accords me the opportunity to share my rich spiritual formation gained through the years from my youth worshipping in All Souls Episcopal church an Anglo-Catholic Caribbean congregation, my young adult and adult years experiencing both the Episcopal and Lutheran Churches, my years of involvement in parochial, diocesan and national church activities and my experience in corporate secular venues, particularly those in which I was the first female and African-American that has helped me navigate through this wonderful journey.

What’s next on your list of things to do as rector?

Currently, there are exciting things happening in the parish.  One of my goals or dreams is to have the church doors open everyday of the week, to expand our bimonthly community dinner to once a week, and to offer week day services not just during Lent and Advent. Currently, Church of Our Saviour is the home of an AA group, Gay Fathers and Husbands and more recently Akron Free Yoga, which previously met in a neighboring church that has had to downsize significantly and close their building. So, I along with the congregation am looking at other partnership opportunities that will help in servicing and impacting our community. Additionally, I am definitely interested in partnering more with St. Philip’s.